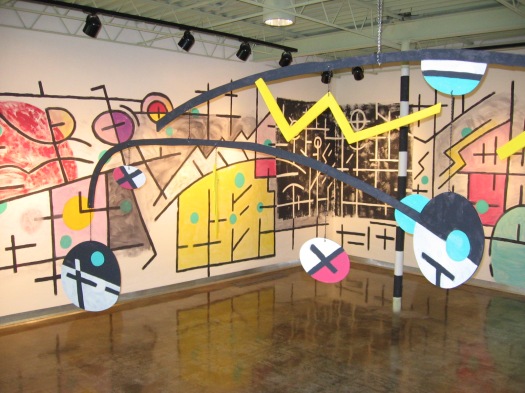 Think of a song, to the title of “Secret Agent Man” of about a million years ago. But it’s called Installation Man! 🙂 haha. Well, it felt like that when I was trying to make this installation work at Underwood Center back in 2006!! I was granted a work reprieve of ONE WEEK!! to make it happen in the back end gallery space. Not a boatload of time. I could have worked on it more – Dawn Wolf-Taylor the director was ever so kind to give me rides to and from the gallery.

I had already quit driving by that time. Seizures (that should explain it). And she probably would have given me even more rides up to the gallery to work more.

I painted 80′ (as I recall – at least) of wall space and installed a mobile in the center. It was imho a good success. If I’d planned better it would have been even more cool than it was.

But my painting process has always been about painting and then repainting, often several times. This project was not going to easily lend itself to that. More planning would have been probably building a model and working through a lot more work in the model stage. I’d never done too much of that.

But the photos I took and all the mileage I’ve gotten since, using those photos to create new artwork, have been the best part of the experience for me. I’m using a highly modified one now as the header photo for my new website: Abstract Painting by Robert Terrell.

As time goes by I might search for more photos of the world famous (in the mind of me) art installation at Underwood Center 2006.

I lost any fear of painting large, that’s for sure!