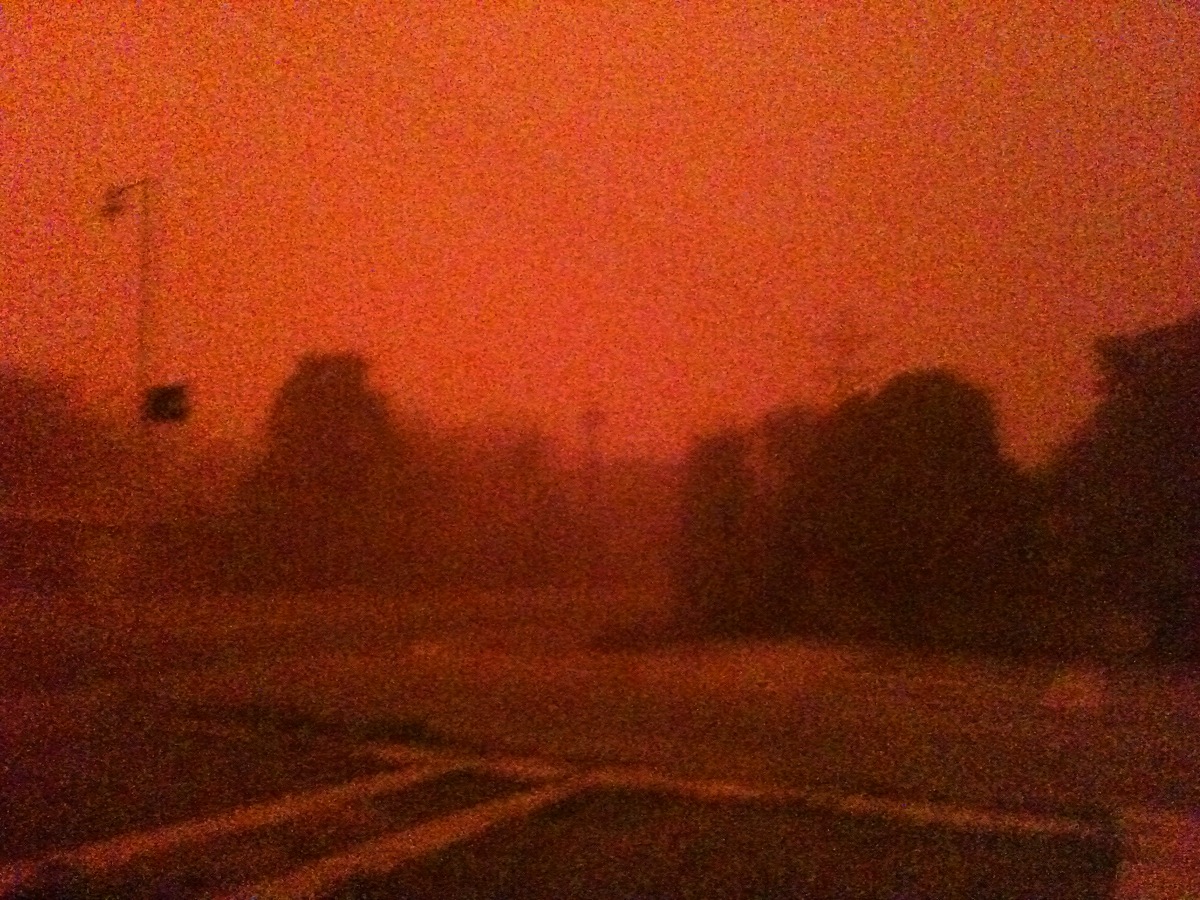 This was taken from my front door! Yaay… It was about 6 years ago – don’t exactly remember. But since I haven’t been a driver for quite a few years now, I rode my bicycle home through it – luckily the dust hadn’t gotten quite so terrible until I got home to the “relative” safety of my wee castle. The wind was pretty rough though – pedaling agains 50+ wind gusts 😦

I’ve seen these as long as I’ve lived here in Haboob, TX, but this was most def a bad ass sandstorm. Growing up we also called them dust storms. I think the name sandstorm must have originated from further south where the topsoil is more sandy. But sometime in the last 20 or so years the name Haboob, from Arabic (I guess) appeared. I like it!! It fits this picture and the experience for me.

I could have told you I’ve already moved to Mars, because this sort of looks like it, except Mars has no soil people. Or trees. Or atmosphere, really. I’m not on the list to move there. Not my idea of a home destination. Earth is a thousand million times better on its worst day imho. But if you don’t like normal gravity or an atmosphere, be my guest.

Ok I’ve sidetracked. But to answer a question some people might have, NO, I didn’t fiddle around with Photoshop to make the sky look more red than it was. It was this freakin’ red.

Yeah, living in the panhandle of Texas can be rough sometimes. But so can anywhere. That’s what I read – when I’m inside avoiding such a Haboob!! But really we don’t get this sort of atmospheric disastro too often. Dust storms yeah, every year, several times. Not this though. Actually I’ve learned not to hate them so much. I’m almost grateful. Because you can almost bet that when we get this… a few hours and a few hundred miles downstream (windstream) from us, somebody will be getting some terrible tornadoes. The winds that produce this usually just blow like heck through here, but then hit the warm moisture front coming up from the Gulf of Mexico. That means real trouble. I’ve seen it happen over and over.

Livin’ in the USA. You gotta have a spine. It does get real!